Baldi Basics Map – In general, horror is a genre that’s in big favor among gamers. There are slews of titles allowing players to either fight with terrible beasts or hide. Some game developers create whole lines of products based on frightening experiences. In order to compete with that, it’s necessary to be resourceful and generate non-standard ideas. And this is exactly what the Baldi basic game presents to us.

Created by an American programmer mystman12, the Kickstarter project quickly spread throughout the Internet. Further, we explore the reasons for the success of this edutainment imitation horror game. The events of the game take place in a commonly-looking school. Nothing seems out of ordinary here, including teachers and schoolmates. However, there’s one person that stands out in the most negative sense you can imagine. It’s Baldi. He is a teacher who hates kids and clearly demonstrates that in his math classes. How come the principal still hasn’t fired him and lets the man educate children?

If you want to go home, you need to solve every given task correctly. Avoid making mistakes, it drives Baldi mad. And then, he’ll pursue you all over the campus. If this happens, the only thing that can help is the ability to run fast!

Initially, the surroundings look cheerful and bright with a happy song in the background. Nothing seems to be threatening or alarming. However, some awful things come about behind closed doors. If you saw any Baldis Basics Let’s Play, you should’ve noticed it’s full of suspense. The author knew how to keep a player on the edge of their seat.

The tension remains high throughout the game, contrasting the environment greatly. Besides, there are some features building up a sense of anxiety and apprehension.

All those factors combined make up for a memorable and intense adventure. Even if you play Baldi’s Challenges Demo version, it’s easy to feel that. So be ready for extraordinary events, read the hints, and expect the worst!

Baldi`s Basics Gameplay And The Goal

Running the game is similar to the way you operate many walking simulators. Baldis Basics Challenges Maps gives a first-person perspective. So shift your mouse to see what happens around you. The common WASD key set makes your character move and assail. If you want to start running, hold the shift key. Doing the left-click will bring you to accumulate the objects found on the location. It also leads to other kinds of interaction with the environment depending on the situation.

There is a goal in the Baldi basics online game you need to achieve. It is to obtain 7 notebooks. What’s difficult is their location is unknown, they are somewhere near the classroom. However, finding them is only a part of the task. Each of the objects you discover presents a set of math problems. Try your best to solve them and make sure your answers are 100% correct.

Otherwise, you will have to deal with the terrifying teacher’s wrath. In addition, some of the tasks simply don’t have the correct answer. And that’s the moment when the actual nightmare starts to evolve.

Overall, dwelling in that imaginary world is somewhat tiresome. At a certain point, you notice the paint job is excessively careless. Players can hardly imagine Baldi’s Basics in real life with all the cracks it has. Nevertheless, there are certain categories of gamers who just don’t care about this aspect. Or else, find it amusing. Presumably, most of them are underage. This demo offers three different challenge maps to discover. Let’s focus on them and break down the details of each location.

1. Speedy Challenge. Here you find yourself one-on-one with Baldi with nobody else around. What’s special about it is that you both move extremely fast. Will you be able to collect all of the 25 notebooks and leave the school?

2. Stealthy Challenge. Principal of the Things chases you, while your main goal is to accumulate 7 notebooks. Use every object on the map to help you remain unseen and accomplish the task.

3. Grapple Challenge. Your equipment includes a grappling hook that you can use an infinite amount of times. And that’s how you can save yourself from being injured by Baldi! Try and outwit him along with his friends, it’s your only way to get moving.

How does it end? There are many variations of the game with each one having its own final scene. For example, Baldi’s Basics Kickstarter Exclusive demo brings you to an empty dark room. As Baldi walks around it, a message appears. It says that one day you’ll get a satisfying ending, but not today. Then, the tutor starts to tremble, accompanied by a roaring and anxiety-inducing sound effect. Which results in the game closing on its own.

Baldi’s Basics – Challenges Demo provides the same ending as the Plus version’s Challenge Mode. Baldi gives you a thumb up, and the screen displays a message. It informs that Baldi is glad and wonders if you can complete even more challenges. Then, the player is sent back to the title screen.

Some variations have several possible endings, up to 12 in the Baldis Basics Classic Remastered version. This sums up a total of 21 various closing scenes in the series.

Baldi Basics Map – Where To Play When it comes to the most popular titles, gamers may also be curious about them. What is Baldi’s Kickstarter Challenges Demo? It’s the second public game demonstration created to celebrate the Baldi’s Basics Classic version’s two-year anniversary. But what happened to Baldi’s Basics Challenges Maps after Classic Remastered was released? It became outdated and was removed from the platform where it was introduced.

But don’t get discouraged trying to find out how to get Baldi’s Basics Challenges Maps. Since the initial game was funded, its creator has been working on its continuation. New versions keep coming out, so the best features are always kept for future updates.

You can find the game online, it’s unblocked and completely free to play. Many websites such as itch.io provide an option to launch it from any device. Basically, it operates as an online free game to play from your browser. You can also find Baldi Basic and download it on your computer.

But also, there are advanced options for true fans willing to pay for additional rewards. While the development is in progress, you can financially contribute to it on Kickstarter. Depending on the amount of money invested, the creator gives different exciting bonuses.

Such as digital goodies, one’s name in the credits, a box version of BaldiBasics, etc. Once the game is out, you receive whatever you paid for.

Generally speaking, it’s not really important what device you use to run Baldis Basics. Download it on a PC or launch it on your smartphone, the essence remains the same. This is a great example of a horror-type game involving edutainment parody and weird looks.

Thousands of users already gave it a try and enjoyed the product. It’s about time you go explore the school’s darkest secrets yourself and attempt to survive. Completing the storyline is definitely worth it!

The mysterious code everyone wants to discover in this game is as follows: 53045009. Another option is using the word "GOOSHOES". However, it should be turned upside down.

How should I answer the impossible question by Baldi?

In order to answer the question known as impossible, insert a particular sequence of numbers. Here it is: “31718”. Once you enter the given code, the private matter becomes unsealed.

It says: “This Is Where It All Began”. Then, you’ll be instantly teleported to the test room. Which was utilized at the stage of game creation.

How do I switch to God Mode in Baldi?

It requires entering this number sequence: "7154131545" in the literature pad. After that, a message with a rhetorical question will appear on the screen. “Since when did you become a god?”

As a consequence, God Mode becomes activated. You will have a few additional keystrokes. Besides, the main character is granted unlimited stamina.

How to play Baldi Basics?

Operating the game is really simple. The WASD keys make your character walk in any direction you want. You can also move your mouse to look around.

Execute the left click to collect items and utilize them with the right click. Pressing shift activates running. All these manipulations should be aimed at one principal goal. Accomplish all the quests, avoid detention, and get out of school.

What is the answer to Baldi’s impossible third question?

In fact, the third and the last question in the game is unsolvable. If there was a solution, the teacher would continue giving you his tasks.

But the goal is to collect all the necessary notebooks and escape. Nevertheless, you can enter the special code 31718 which leads to some unexpected events. They conclude the game. 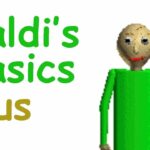 Baldi’s Basics Plus
Next Article