What is Baldi’s Basics Full Game? Imagine coming to a math lesson to calculate some equations. But when you make a mistake (there is no avoiding it), you’re doomed. Your teacher turns into your worst enemy.

Instead of a friendly smile, you see fury on the face: it’s chilling! As well as hear threats that inspire you to run! But you can’t rush to exit right away: there are 7 notebooks to collect! Education and pure horror collide and mix into great entertainment!

Who made Baldi’s Basics? Micah McGonigal, a passionate and talented programmer, is the sole developer of the video game. At first, it was just a game event project (annually launched on Itch). It was highly rated, landing at the 2d place in the end.

But then it went viral, with everyone enjoying the hide-and-seek challenge. Also known as the Mystman12, the developer made it into something more. New features, obstacles, characters, and items glue players to the screen for good. We’ll tell you more about Baldi Basic: download it or enjoy the game online! 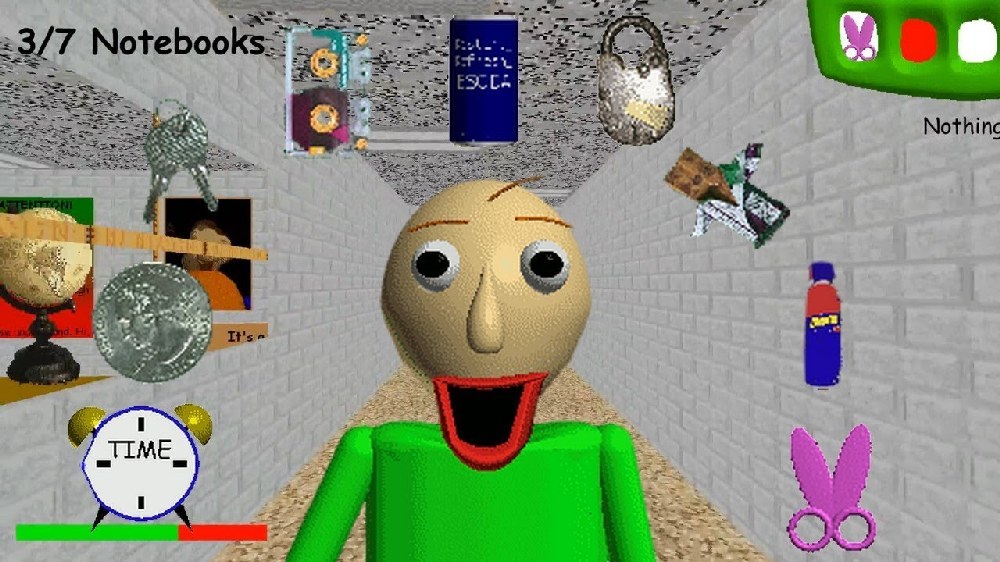 When submitted to the Jam, this indie creation jumped to the top right away.

It has all the necessary elements to attract attention:

1. Easy-to-grasp mechanics. You come to school, say hi to the teacher, attend classes, and complete tasks. Everything is idyllic until you make a mistake. After that, do all you can to avoid furious Baldi.

3. Immense suspense. No monsters, teeth, brutality, or blood. But you’re freaking out each time you hear Baldi approaching. It’s a successful recipe: at first, everything is fine, and then something goes wrong. You fail to please the teacher, so the punishment is inevitable. Even adults can relate to this feeling!

You don’t have to download anything to dive into this creepy atmosphere. The Baldi Basics game is available online. You can play safely here: it’s a website solely dedicated to the indie title. There is a classic version, as well as variations to fuel the interest.

The Announcement of the Next Phase 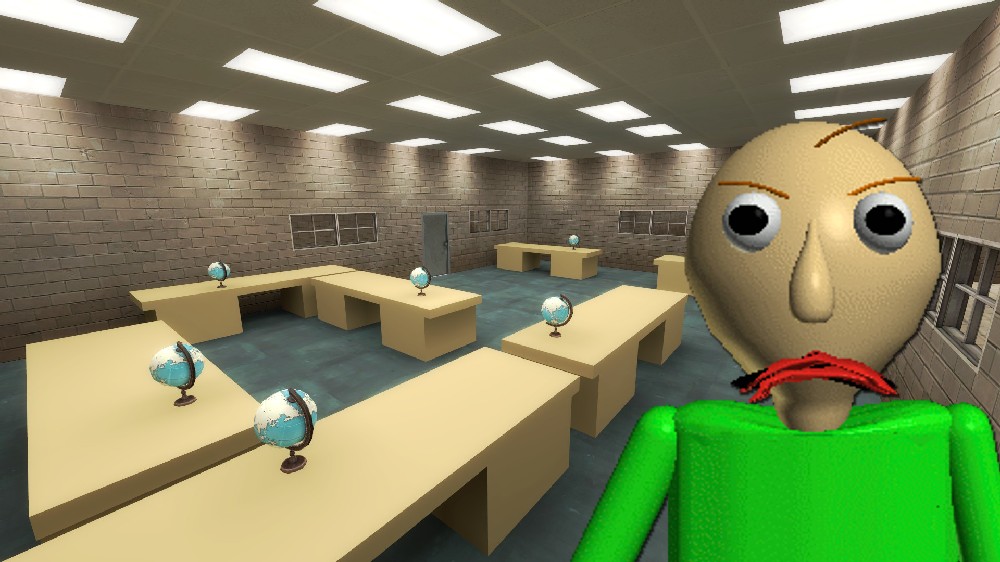 What happened to Baldi’s Basics after it made all that noise at the Itch event? It accumulated a huge fanbase. Seeing the potential of the adventure and people’s support, the creator decided to go further. Micah McGonigal wanted to improve Badis Basics to make it a big-format project.

Being the only one to work on the programming, the developer needed funding. It was not that difficult to get: the title was super trendy. With the help of Kickstarter, the necessary sum (and even more) was quickly donated.

These are a few highlights from the crowdfunding pledges:

1. Devotion to the original concepts. McGonigal had been cherishing this idea long before submitting it to the Jam. The art and basic mechanics were what the developer planned to stay true to. But some improvements were to be added to allow a better experience. Such as new areas, doors letting in only in one direction, etc.

2. The uniqueness of each level. Creating other areas, the Mystman12 was planning to add many more characters and items. Don’t worry: they won’t be there together to make a mess. Instead, the randomizer will pick them to generate a unique level, something you’ve never enjoyed before!

3. Special events. As you play, something can go wrong. Just like at a real school, the lights may go off, so you’ll hardly see anything. Or imagine a total nightmare: Baldi’s ruler is broken! So you no longer hear where the teacher is. The developer planned many other such innovations that would be also launched at random.

4. Bus trips. Students sometimes leave the schoolhouse and enjoy field trips together. The teacher can take you camping, to the farm, etc. This brings a new array of tasks to complete and settings in which you’ll escape danger.

5. Code from scratch. The programmer wanted to get rid of mistakes and create a more optimized foundation for the project. This will make the AI smarter and the characters’ movement patterns less predictable.

The goal was to collect $50,000. Was the campaign successful? Yes, and even more than that! The total sum was even bigger – over $61 thousand! 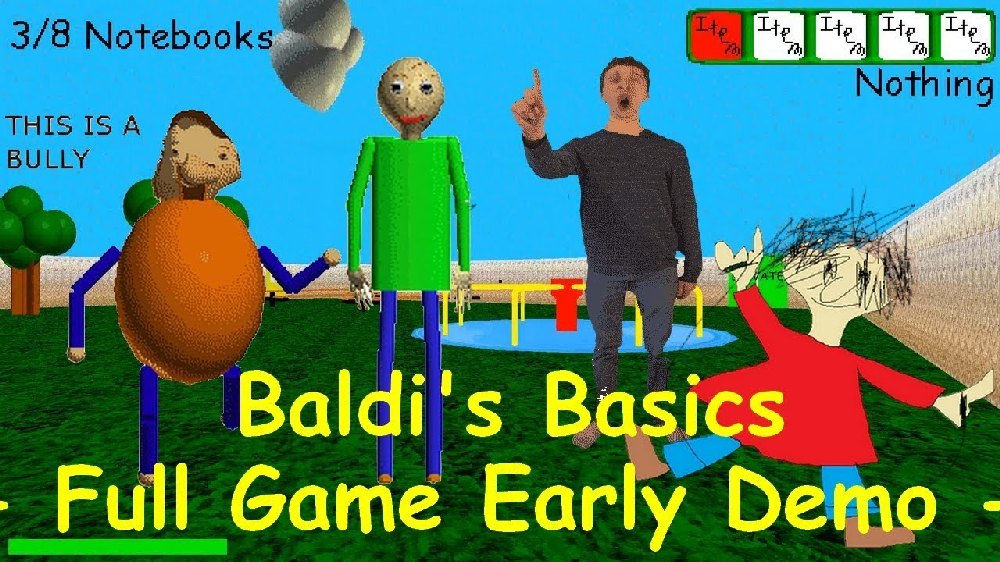 Hard work, fans’ support, and time… It took a lot of effort to complete all these ambitious goals. And to deliver the long-awaited video adventure!

When did Baldis Basics come out? In 2020, McGonigal shared the playable version. Although it was not entirely finished, it was fun enough to dive into. The programmer didn’t want to torture the audience, making them wait for 2 or more years.

It has some of the features mentioned above. Now we’ll describe some of them.

Not much has changed in the mechanics. Moving is accomplished just like in any other similar adventure. Tap WASD to go forward, left, back, or right. Your mouse allows you to turn, while Space activates a quick look behind your back. Press LMB to interact with the item or to use it. If you scroll, you’ll change objects you already have. And if you need to run fast, hold Shift. But keep an eye on stamina. You can’t engage in this energy-draining activity as long as you want.

Is Baldi’s Basics still a horror game to its core? Oh, yes! It has creepy visuals and hair-rising sound effects. Combined together when you’re in the round, they make that bone-chilling and heart-pounding sensation.

Whom will a Baldi player meet in this better incarnation of a classic challenge?

Here are only a few of them:

There are 3 ways you can complete the journey:

Baldis Basics: Download for a PC and Other Devices

Although the adventure is not entirely finished, you can access it anyway. It’s available on Itch.io, can be downloaded from Steam, or even purchased on Game Jolt. 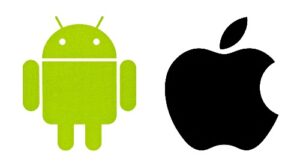 There are also mobile versions of the challenge: iOS and Android. If you want to enjoy Baldi Basic, download them and have fun!

But there is a second option. Try a free Baldi Basics online game that will run right through your browser. Be careful with various websites claiming to have the adventure you’re looking for. Some of them are poor-quality copies that may even contain viruses. Come to Baldi Basic com and play safely!

As you know, there are various versions of the challenge. E.g., Baldi’s Basics Classic, Birthday Bash, Field Trip, etc. Read more about all Baldi games in the following article.

Impact on the Culture

This simple but addictive indie title has made its way into various aspects of our society. Lots of people play it. Different developers try to mimic the mechanics and get their pieces from the fame cake.

You can spot Baldi’s Basics in real life in unexpected places. E.g., prints on T-shirts and other items. There are funny videos of people reconstructing the challenge in their homes! And even songs dedicated to the video toy.

Enjoy Baldis Basics lets play videos or dive into it yourself. Either opt for an online free game or download the challenge to your device. We’ve provided you with the links which you can use to get access to the adventure. Good luck outsmarting the teacher and other characters and surviving in this virtual school!

Has the developer completed the full version of the title?

No, he hasn’t. But you can still enjoy what is ready! How to get Baldi's Basics? Download it through the official link (e.g., through Steam).

But be ready to pay for this digital product. Or opt for free play online which is possible through your browser. Read our articles to get the necessary links.

How to answer the third Baldibasics question correctly?

If you’ve ever played the adventure, the 3d question seems like nonsense. Some people hope there is a solution.

But it’s the point of the digital toy: getting the teacher furious sets everything in motion. No matter what you type in, it’ll be wrong. Except for a code to unlock the secret room. Try 31718 and see what happens next.

How can I influence the adventure?

If you enter codes, something interesting may happen. For instance, try 53045009 when answering the math questions. It’ll turn the surroundings upside down.

Attention: this only works with the classic version. Check out this page to find more funny combinations to enjoy.

What is 1st Prize?

It’s a robot that looks like a cube with a head and 2 arms. The creature is not creepy or too dangerous. When it sees you, it wants to hug you. Its desire is so great that the robot even asks you to marry it!

But the tricky part is that it can push you toward danger. E.g., to the infuriated teacher.

Why does the teacher have such a strange name?

Baldi Baldimore was created several years before the actual title. Mystman12 used it in the comic story that features a bald dude who is always hungry. The developer used the same character in the game instead of designing one from scratch. 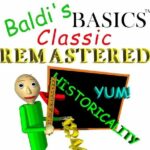